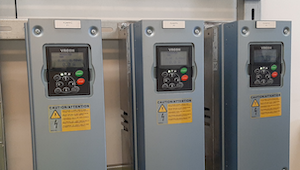 The electricity transmission supplier for Sipoo Water is Kerava Energy. It supplies electricity to Sipoo Water's dozens of electricity metering points, most of which are individual wastewater pumping stations. The pumping stations have automatic and remotely readable consumption meters that transmit data over the GSM network. Consumption data previously transferred was limited to daily usage, but the available data also includes consumption data with hourly accuracy. Masinotek has developed a separate application programming interface service as part of the EMMI and AHJO systems, which enables it to continuously retrieve the remote data readings of any electricity network operator.

Data are recorded real time in EMMI's electricity consumption monitoring via the application programming interface (API). For clarity, EMMI provides observation points for each wastewater pumping station. In the initial phase of the API implementation, in order to include a sufficiently comprehensive amount of data from historical electricity consumption data more than 400,000 datapoints were uploaded, . Now consumption data are collected by EMMI once a day with one hour frequency.

Normally, the operation of sewage pumping stations is based on a certain daily variation, which follows the rhythm of a household's normal daily living habits. The rate of use of pumping stations almost directly corresponds to consumer use of tap water. In residential areas, this rhythm is interrupted almost exclusively by changes in the weather between the rainy and dry seasons. If the area's stormwater is directed to a separate and often gravity-driven stormwater system, then the onset of rain should not be reflected as an increase in the operation rate of the wastewater pumping stations at all. Therefore, an increase of the frequency of the wastewater pumping station's operation indicates either storm water seeping into the wrong pipe network or a direct leakage situation in the sewer network.

The EMMI system has a unique derived results function. With this, almost any measurement results from completely different measurement data sources and APIs can be combined in real time. The function enables, for example, the monitoring of precipitation in relation to electricity consumption. In the case of Sipoo Water, Masinotek also implemented another API to bring weather data from the nearest public weather stations of the Finnish Meteorological Institute to EMMI. This data is combined with the electricity consumption measurements of all pumping stations. The end result clearly shows in the graphs if the rainfall affects the operation rates of several connected pumping stations and of a individual pumping station.